here is the announcement trailer for our next physical Nintendo Switch game: Razion EX

We also opened the official website with information about the game system, controls, screenshots etc.

The release is scheduled for the next 2 weeks. We will announce the exact date and time in a few days.

RAZION EX is a horizontal 16 bit CGI shooting game.
The score system is based on growing gold cubes and using the beam
It has 3 game modes (NOVICE/NORMAL/MANIAC).

Novice mode is significantly easier and will allow more people to enjoy the great graphics and music.

Collecting cubes reloads your beam faster.
After a beam was fired your shot system needs to cool down to regain full power again
Grow cubes to increase your score. Scoring high grants extra lives.
Cubes can disappear and break if too long exposed or get outside of the screen.
Use the beam to freeze or re-freeze cubes so they exist longer.

The enemy multiplier is dynamic and influences how much score you receive by each enemy.
It's influenced by the amount and status of the cubes on the screen.

- Unlock more continues by playing the game or training mode.

- At the end of the stage there is a sizeable "BOSS NO BEAM BONUS" if you didn't fire any beam in the boss fight.

- Frozen cubes can slowly freeze other nearby cubes.

- The ultimate goal of a STG/shmup is to clear it with only 1 continue (1CC).

THE FUTURE IS RIGHT NOW...
Haut 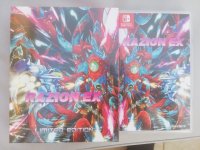